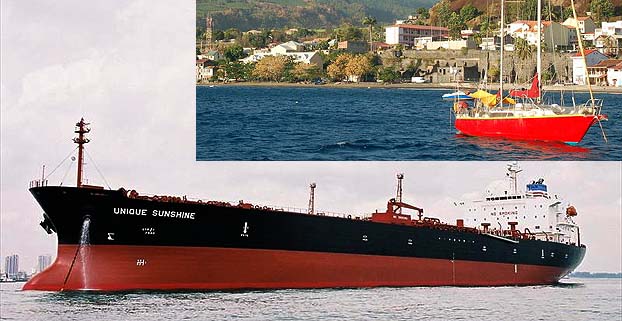 According to news sources, the U.S. Coast Guard, reported that they, the Canadian Joint Rescue Coordination Centre Halifax, a Canadian Forces CC-130 Hercules and two merchant vessels worked together to rescue four French sailors more than 1,400 miles east-northeast of Provincetown.

The sailboat was righted, but could not make its way into port.

JRCC Halifax personnel contacted the 1st Coast Guard District Command Center staff in Boston at 9:40 p.m., Wednesday, reporting the sailboat had capsized with four people aboard after they received notification from the sailboat captain’s father. The captain called his father in Quebec, Canada, via satellite phone to notify him of their situation and location.

At approximately 9:50 p.m., the District Command Center also received an alert from the boat’s 406 MHz Emergency Position Indicating Radio Beacon, as well as notification from the SPOT GPS messenger response center. SPOT is a commercial emergency system that sends a vessel’s GPS location to the company’s emergency response center.

“It’s great that the sailors have so many means of communication aboard their boat,” said Tim Carton, the search and rescue specialist for the 1st District. “We recommend all mariners have multiple means of communication, such as marine VHF-FM radio, satellite phone and an emergency beacon, especially if traveling far offshore where cell phone and radio communication to shore could be unreliable. These men went a step further and also had the commercial GPS locator. All these resources helped us ensure we had the correct location of the vessel.”

The Canadian CC-130 was diverted to the sailboat’s location and dropped a sea rescue kit that contains a life raft and survival gear to the sailors.

The Unique Sunshine arrived on scene first and provided the sailboat with shelter from the wind, maintained communications with the sailors and provided the Coast Guard with updated information while the Maersk Chancellor was en route.

The Maersk Chancellor has two rescue vessels and the crew is trained in offshore rescues.

Once the Maersk Chancellor arrived on scene, the oil rig’s crew rescued the sailors as the Unique Sunshine continued to shelter the vessels from strong winds and heavy seas.
The on scene weather was 45-knot winds with 25 to 30-foot seas.

“The AMVER program is an invaluable resource for us that extends our search and rescue capabilities outside the normal operating area of our Coast Guard assets,” said Chief Petty Officer George Bannon, a search and rescue watchstander at the District Command Center.

AMVER, sponsored by the Coast Guard, is a computer-based voluntary global ship reporting system used worldwide by search and rescue authorities to arrange for assistance to persons in distress at sea.