A McMurdo Smartfind Plus G5 GPS Emergency Position Indicating Radio Beacon (EPIRB) recently helped to save the lives of three sailors off the coast of North Carolina when the mast and rig on their 36 foot catamaran came crashing down to the deck.

The mishap also resulted in the loss of the catamaran’s VHF radio antenna, so Jon Rodnon, owner of Cata-Tonic, activated the McMurdo EPIRB, which he had rented for the voyage.

According to BoatU.S., within minutes of its activation, the McMurdo EPIRB had set the wheels in motion for response by the US Coast Guard. Within 45 minutes, a Coast Guard cutter arrived on the scene to assist the crew of Cata-Tonic in cutting away the tangled mess of the fallen mast, rig and sails. Then, the captain started the engine and the catamaran was able to make its way back to port for repairs.

“The EPIRB saved us and I can’t think of anything more important than having an EPIRB when going offshore,” Jon Rodnon told BoatU.S.

The compact McMurdo Smartfind Plus G5 GPS EPIRB features a high performance, multi-channel GPS which brings the location accuracy down to typically less than 62 meters, greatly increasing the chances of rescue in an emergency situation. The battery offers a minimum of 48 hours of operation and has a six-year life.

When offered through marine retailers, the G5 GPS EPIRB is supplied with a manual release bracket. A SOLAS approved automatic housing is also available. 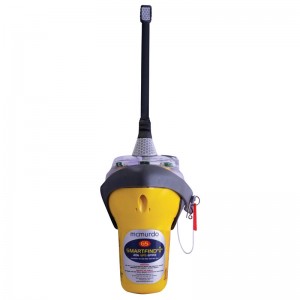